Today, ENAIRE placed into service new arrival, departure and approach procedures based on satellite navigation at the Vigo Airport. This measure is an improvement for airlines and passengers since from now on, the range of landings available has increased to include new options that allow operating fully independently of land-based navaids.

With this action, ENAIRE is providing users of the Vigo Airport with arrivals, departures and approaches based on satellite navigation from pre-existing entry and exit points, in addition to offering options that were not previously available. This increases the flexibility of operations by offering new options for accessing the airport. This is all possible without having to set up additional land infrastructure, which represents financial savings and operational benefits as a result. To carry out these procedures based on the use of satellite navigation, the aircraft need to be properly equipped and their crews trained.

The new approach manoeuvres are particularly noteworthy for the following reasons:

-    Two of them require the use of the EGNOS system, which improves the characteristics of the GPS signal. They are the first of their kind in Galicia.

-    For the first time, vertical guided manoeuvres are available for the 01 threshold. This improvement will make the airport more accessible, reduce diversions and enhance operational safety.

-    Threshold 19 includes manoeuvres in addition to those already in place - in some cases with higher performance than the latter - which will also increase the availability of landings for aircraft. 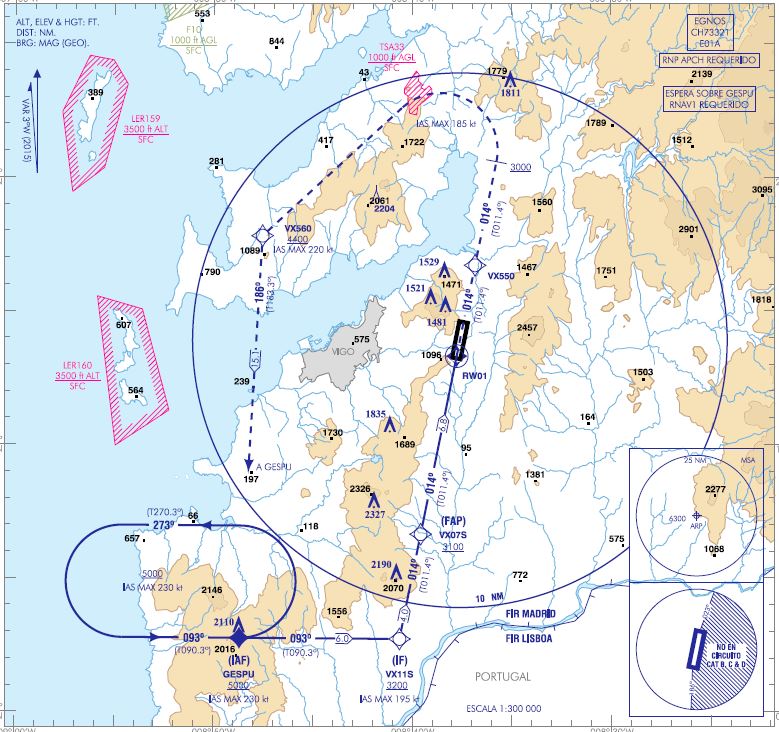 The new approach manoeuvres also include procedures based on the European EGNOS satellite system. To implement them, ENAIRE had to sign a working agreement with Ferronats, the air traffic control service provider at the Vigo Airport, and ESSP, the company that develops the EGNOS system in Europe, owned by ENAIRE and other air navigation managers from Germany, France, Italy, Portugal, the United Kingdom and Switzerland.

This implementation of new procedures in Vigo is in addition to those already in place at the airports of Seve Ballesteros-Santander, Almería, Valencia, Fuerteventura, Palma de Mallorca and Lanzarote. A new approach manoeuvre was also implemented in A Coruña on the same date as in Vigo. In addition, the Málaga-Costa del Sol Airport has a satellite-based ground augmentation system called GBAS and procedures for precision operations based on this system.

These new approach procedures based on satellite navigation will help continue to move forward in meeting the requirements of the Performance-Based Navigation (PBN) Implementation Plan, laid out in ENAIRE's 2020 Flight Plan. It also assists in complying with European Commission Implementing Regulation (EU) 2018/1048, the aim of which is to improve the efficiency of air traffic management at the European level by implementing performance-based navigation (PBN).

To allow airlines to land and take off using this new method, ENAIRE has conducted the necessary safety studies, which were approved by the Spanish Aviation Safety Agency (AESA).

ENAIRE is the company belonging to the Public Works Department that provides air navigation services in Spain. It renders aerodrome control services at 21 airports, including the busiest in terms of air traffic, plus en-route and approach control, from five control centres: Barcelona, Madrid, Gran Canaria, Palma and Seville.